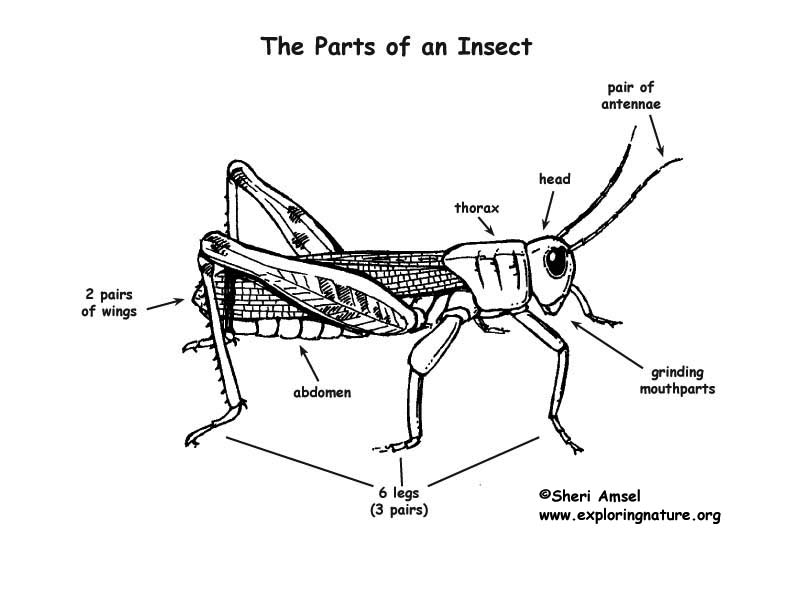 There are more insects on earth than all other kinds of creatures combined, over 900,000 known species.

Insects can hurt people by damaging their food crops and forests, passing along diseases, biting, and stinging. They also can help people by pollinating food crops, making products like honey, supplying animals with food (like song birds, turtles, frogs and bats) and ridding us of other pests like aphids and such. One thing is for sure they will always affect people.

It is fun to collect insects and study them or to just see them outside and watch what they do. To understand insects and make watching them more interesting there are some things you should know about them.

What makes a bug an insect?

• 2 pairs of wings attached to the thorax

• 3 pairs of legs attached to the thorax

• A pair of antennae attached to the head

A good sample insect is the grasshopper. It has all the traits of a typical insect plus some other interesting features.

• The grasshopper listens with a type of eardrum on its sides.

• It has grinding mouthparts for eating grass and a grinding gizzard to further breakdown its food.

• It has small openings all over its body called spiracles through which it breathes.

• They go through what is called "incomplete metamorphosis” which means that it hatches looking somewhat like an adult but smaller and gradually grows into its adult size and form.

"Complete metamorphosis” as in butterflies and moths is where the insect goes through a complete change from birth to adulthood. It hatched as a wormlike larvae with mouthparts built for eating. It then cocoons itself up to form a pupa, where it goes through a complete physical change. Then it emerges from the cocoon as an adult insect. One purpose of this change allows the insect to use several food sources. Early on as a caterpillar it can eat leaves. Then by the time the adult butterfly emerges, the plants have flowered and they can collect nectar. They can also survive the winter in their pupal phase and try again next summer.

©2005-2023 Sheri Amsel. All rights reserved.
The material on this site may not be reproduced, distributed, transmitted, cached or otherwise used for anything other than free educational use. It is not to be used for sale or profit of any kind. If you are unsure whether your use of site materials violates the exploringnature.org copyright, contact Sheri Amsel for prior written permission at sheri@exploringnature.org. Thank you for respecting copyright laws.
Site Developed by Eli Madden
Page ID: 1205
IP: 44.192.247.184