All About Mammals - Lecture 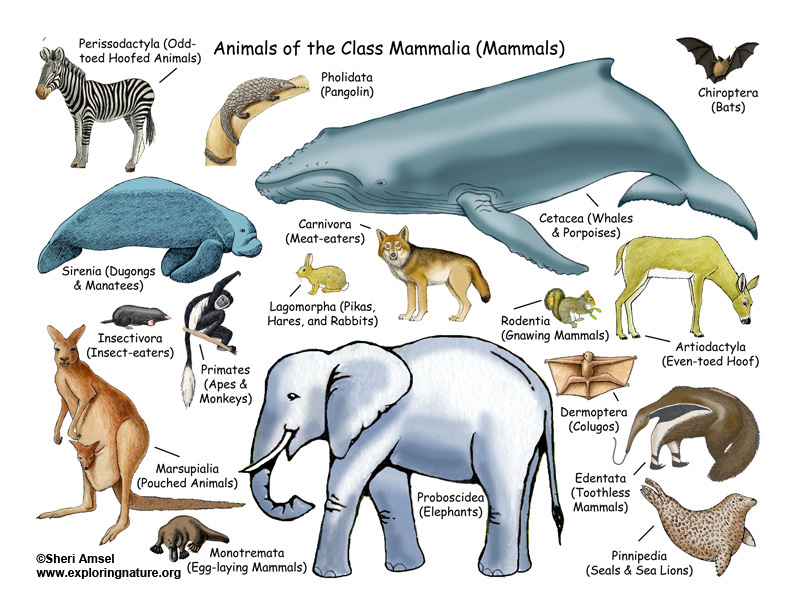 The mammals (Class Mammalia) includes everything from mice to elephants, bats to whales and, of course, man. The amazing diversity of mammals is what has allowed them to live in any habitat from desert to arctic to the deep ocean. They live in trees, they live on the ground, they live underground, and in caves. Some are active during the day (diurnal), while some are active at night (nocturnal) and some are just active at dawn and dusk (crepuscular). They live alone (solitary) or in great herds (gregarious). They mate for life (monogamous) or form harems (polygamous). They eat meat (carnivores), they eat plants (herbivores) and they eat both (omnivores). They fill every niche imaginable.

Mammals come in all shapes and sizes from the tiny pygmy shrew, weighing 1/10 of an ounce (2.8 grams), to the blue whale, weighing more than 300,000 pounds! They have a huge variation in life span from a small rodent living one year to an elephant living 70 years.  Generally, the bigger the mammal, the longer the life span, except for bats, which are as small as rodents, but can live for up to 20 years.

Though huge variation exists in mammals, there are a few physical traits that unite them.

1) Mammals are covered with body hair (with the exception of marine mammals like dolphins and whales who have traded the benefits of body hair for better aerodynamics for traveling in water). Hair is important for keeping mammals warm in cold climates, protecting them from sunburn and scratches, and used to warn off others, like when a dog raises the hair on its neck. Sometimes hair is adapted as a protective tool like the spines on a porcupine or the shield on an armadillo or pangolin. Hairs can be used to feel for things, like the whiskers on a cat or sea lion or act as camouflage to blend into the mammal’s habitat.

2) Mammals have 3 middle ear bones called the malleus (hammer), incus (anvil), and stapes (stirrup). They greatly improve a mammal’s hearing, which allows a better ability to communicate. Specifically, when sound waves hit the eardrum, these small bones transmit the vibrations from the eardrum (tympanic membrane) to the inner ear.

3) Female mammals have mammary glands that make milk to feed their young. The milk is full of fat and protein that helps young grow and develop, giving them a good start toward surviving to adulthood. They care for their young and bear live babies (not in eggs).

4) Mothers (and sometimes fathers) will protect young from predators and often live with them even after they are finished nursing to allow them to learn how to hunt, survive predation or be in a social group. (This is not unique to mammals, as most birds and even some reptiles do this, but all mammals do this.)

Some other traits of mammals:

Wild mammals are hard to catch sight of because most are nocturnal. Some diurnal (active during the day) species include chipmunks and squirrels. (Wild mammals should never be approached because they can carry rabies, especially fox, skunks, bats and raccoons.)

Some Orders of Mammals:

In this example, the chipmunk, deer mouse, and squirrel are all in the order Rodentia. Look at the similarities in their form. Now look at their differences. Drawing animals makes you really study how their bodies are put together and how they are related. Rodents all have large front teeth (incisors) for chewing. They have a body structure suited for sitting back on their hind legs and handling food with their front feet. Think about how different that is from a carnivore like a coyote. This shows you some of the real differences between animal groups. Drawing animals helps illustrate their taxonomic differences. 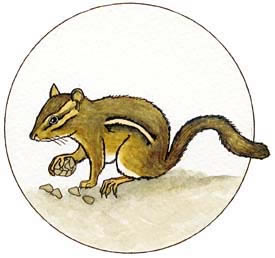 ©2005-2023 Sheri Amsel. All rights reserved.
The material on this site may not be reproduced, distributed, transmitted, cached or otherwise used for anything other than free educational use. It is not to be used for sale or profit of any kind. If you are unsure whether your use of site materials violates the exploringnature.org copyright, contact Sheri Amsel for prior written permission at sheri@exploringnature.org. Thank you for respecting copyright laws.
Site Developed by Eli Madden
Page ID: 1223
IP: 44.192.247.184