Hybrid plants are different from dominant plants even if they looked the same. Each gene has two chances at a trait (two copies) or two alleles. So a hybrid plant could be carrying the allele for a recessive trait even if you can't see it. So, for example, a hybrid plant might be tall like its dominant parent, but it still could have an allele for shortness that you don't see. This is the difference between genotype and phenotype. The genotype is the actual genetic make up of an individual. The phenotype is what that individual looks like.

This can be illustrated with a simple chart. It's called a Punnett's Square. We'll use the example of tall pea plants verses short pea plants. When two tall dominant plants breed, all the offspring are tall dominant. When two hybrid plants breed, one in four of the offspring are short. This is a 3:1 ratio. Look at the Punnett's Square to see what kind of offspring you would get from a dominant and hybrid parent mix and two recessive parents. 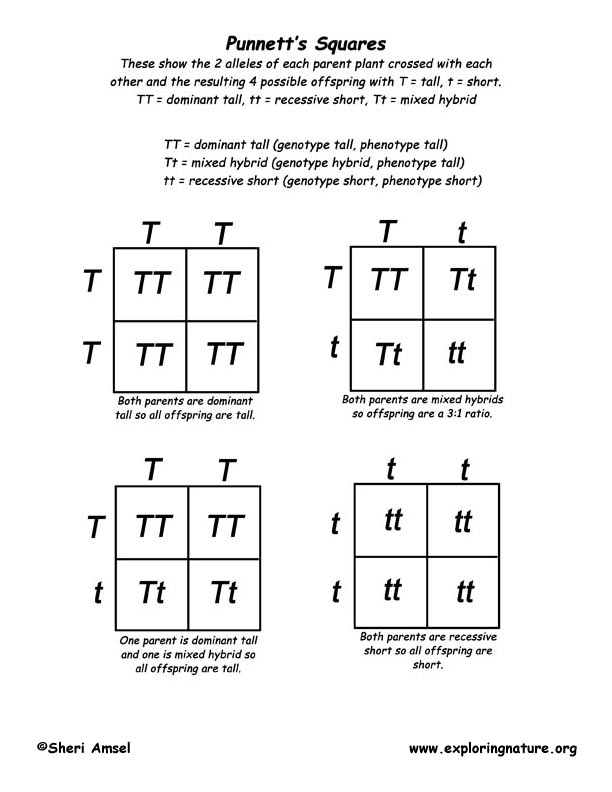 ©2005-2022 Sheri Amsel. All rights reserved.
The material on this site may not be reproduced, distributed, transmitted, cached or otherwise used for anything other than free educational use. It is not to be used for sale or profit of any kind. If you are unsure whether your use of site materials violates the exploringnature.org copyright, contact Sheri Amsel for prior written permission at sheri@exploringnature.org. Thank you for respecting copyright laws.
Site Developed by Eli Madden
Page ID: 1526
IP: 34.204.174.110