Adaptations of the Striped Skunk 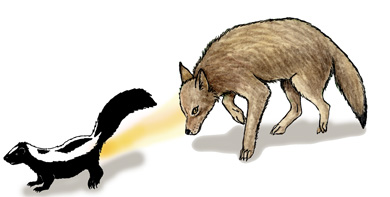 Adaptation in a population of living things happens as a result of an adaptive trait. This is any inheritable trait that increases it’s survival rate so that it can live longer, reproduce longer, and have more offspring (that also have that trait). Adaptive traits can improve animals find food, make a safer home, escape predators, survive cold or heat or lack of water.

The striped skunk is a small mammal who lumbers along slowly on tiny feet. They don’t have to run to escape predators because they have an adaptive trait that stops predators in their tracks. Skunks have glands underneath their tails (anal glands) from which they can spray a very toxic musk at predators. This spray is so strong that it can cause pain and temporary blindness if it gets in the eyes. It also sticks to whatever it hits and the strong smell can linger on its target for months. When threatened, a skunk will turn its back, lift its tail and spray their toxin. In addition, the skunk advertises its identity with its distinctive black and white striped body. Predators that have been sprayed will see its markings and not come anywhere near this animal. This physical adaptation has proven to be very useful in warding off predator attacks.

For Discussion and Critical Thinking:

2. Name two other animals that have similar adaptive traits which helps them survive.

3. Why do you think pet dogs are often the victim of a skunk’s toxic spray? 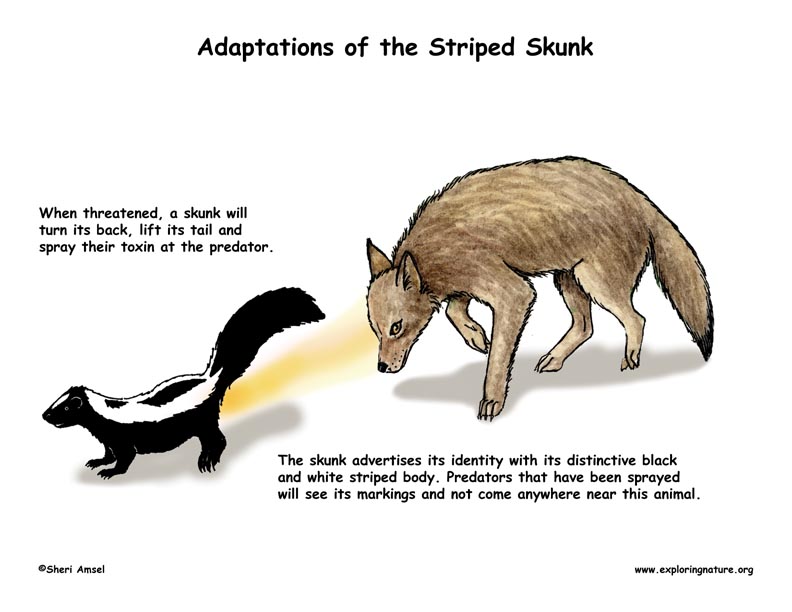 ©2005-2022 Sheri Amsel. All rights reserved.
The material on this site may not be reproduced, distributed, transmitted, cached or otherwise used for anything other than free educational use. It is not to be used for sale or profit of any kind. If you are unsure whether your use of site materials violates the exploringnature.org copyright, contact Sheri Amsel for prior written permission at sheri@exploringnature.org. Thank you for respecting copyright laws.
Site Developed by Eli Madden
Page ID: 1685
IP: 3.238.204.167