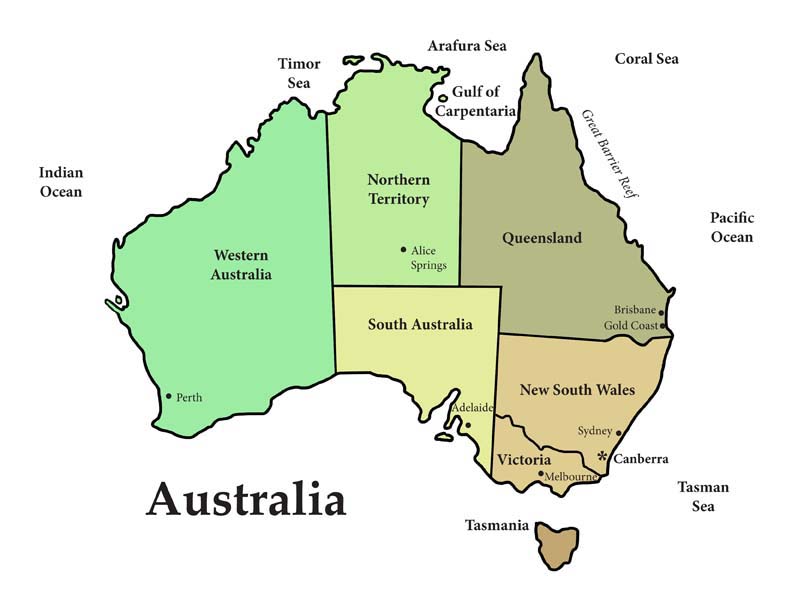 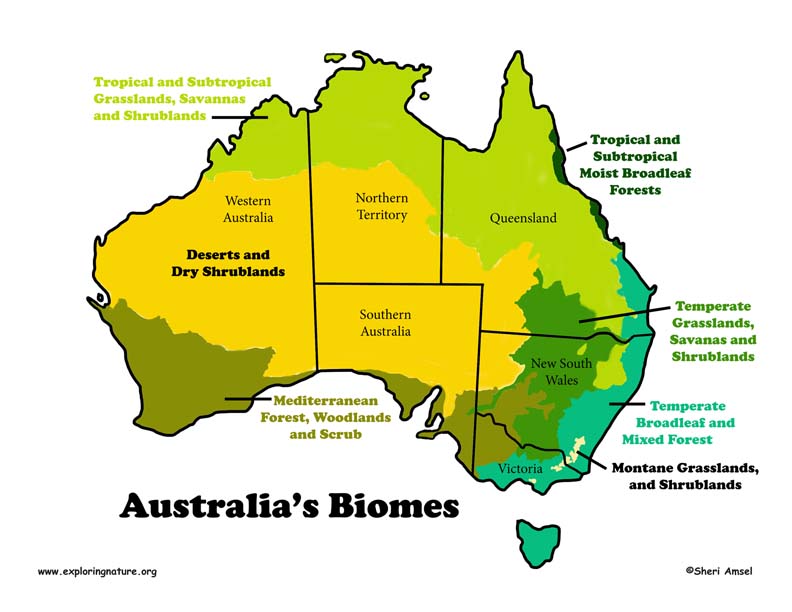 Australia is a large country (6th largest in the world) covering almost 3 million square miles (7,617,930 sq km). It includes Tasmania and other smaller islands including: Christmas, Cocos (Keeling), Ashmore, Torres Strait, Coral Sea, Lord Howe, Norfolk, Macquarie, and Heard/McDonald and the Australian Antarctic Territory. Though a huge country, Australia is actually the smallest continent. It has 21,262 miles (34,218 km) of coastline and the largest coral reef on Earth - the Great Barrier Reef - off the coast of Queensland. The Great Barrier Reef is 1,240 miles long (2,000 km). Australia is surrounded by the Indian and Pacific oceans. North, across the Timor and Arafura Seas lies Asia. Southeast across the Tasman Sea lies New Zealand.

Australia has many interesting land features as well. Its famous monolith – Mount Augustus is found in Western Australia Territory, north of Perth.  It is called Burringurrah by the local Wadjari Aboriginal people. Another striking rock formation is Ayer’s Rock (also called Uluru by the Aboriginal people), a large sandstone formation found in southern region of the Northern Territory – about 200 miles (335 km) southwest of Alice Springs.

The Eastern Highlands (also called the Great Diving Range) is a 2,175-mile (3,500 km) mountain range that stretches from northeastern Queensland south through New South Wales and Victoria. The tallest peak in the range is Mount Kosciuszko at 7,310 ft (2,228 meters). Australia’s tallest peak is Mount McClintok at 11,457 ft (3,492 meters) in its Antarctic Territory. Despite its mountains, Australia is still considered the flattest continent.

In northern Western Australia Territory is the Kimberly (one of the earliest settled parts of Australia). It is known for its steep, dramatic sandstone and limestone gorges and ridges that have been scoured clean by the monsoons. The southern part of the Kimberly opens up into open savanna where many cattle ranches are located.

Because Australia is essentially a huge island, it has a large percentage of animals and plants that are found only on Australia (endemic or indigenous). More than ¾ of its mammals and plants and almost half its birds are found only in Australia. Some of Australia endemic animals include the monotremes – like the platypus. They also include the marsupials, including kangaroos, koalas, and wombats. Another mammal associated with Australia are the dingos – a type of wild dog. Some endemic birds are the emu, kookaburra and lovely fairywren. Australia has more lizards than any other place on Earth – 775 species and some of the most venomous snakes.

Because of Australia's large size, it is not surprising that it has a great diversity (wide range) of habitats (or biomes).

Northeastern Australia has a small region of rainforest scattered along the coast of Queensland. This is the area of Australia with the most rainfall – 78 inches per year (200 cm). These forests are home to many of Australia's native animals. Scientists call this ecoregion Tropical and Subtropical Moist Broadleaf Forest.

From the southeast Queensland coast wrapped south around the continent to the southern coast of New South Wales and Victoria, Australia has temperate forests. Depending upon the temperature and rainfall, the forests can be a mix of deciduous trees and evergreens (like eucalyptus). Two of the most common broadleaf trees in Australia are the eucalyptus and acacia (also called wattle). During the long droughts, which Australia sometimes experiences, these temperate forests act as areas of refuge for many native animals and plants. Scientists call this ecoregion Temperate Broadleaf and Mixed Forest.

Much of northern Australia (Western Australia and Northern Territory) and down the eastern side of the continent (Queensland and New South Wales), just inland from the rainforest and temperate mixed forest, is moist grassland and scrubland. Though a little too dry for forest with only up to 60 inches (150 cm) of rainfall per year, this area is not considered arid land (dry). It is much wetter than the dry scrublands of the central continent and even has small areas of temperate rainforest where rainfall allows. Scientists call this ecoregion Tropical and Subtropical Grassland, Savannas and Shrublands.

Between the temperate forests of the eastern and southeastern coast (Queensland south through New South Wales and Victoria) and the desert interior of Australia is a region of temperate grassland and scrubland. These grasslands are cooler and drier than the grasslands of the north. There are few trees here except narrow bands of riparian forest along rivers and streams. Scientists call this ecoregion Temperate Grasslands, Savannas and Shrublands – though much of this ecoregion has been converted to agricultural use.

There is a small (less than 3% of Australia) band of high elevation grasslands and shrublands in southwestern Australia (southern New South Wales through Victoria) found above 4,200 feet (1,300 meters). This biome is also found on Tasmania. Scientists call this ecoregion Montane Grasslands and Shrublands.

Another distinct biome (ecoregion) here is identified by scientists as Mediterranean Forests, Woodlands and Shrubs. It is found in the southern region of the Western Australia Territory, coastal Southern Australia Territory, southwestern New South Wales and western Victoria. This biome has hot and dry summers and cool and moist winters. It is not a rare biome throughout the world as scientists have found only four other regions on Earth that experience these conditions. There is a great diversity of animals and plants in this region (more than 5,500 species of plants). The plants are adapted to frequent fires and have developed seed germination that is dependant on fire as well as rapid re-growth after fires.

Australia’s massive desert and dry scrublands are found in the center of the continent stretching to the west coast and have been commonly called the Outback. The only Australian Territory without desert is Victoria. With typical desert habitat severity, this region can be scorching hot during the day and very cold at night. Despite its extreme nature, Australia’s desert has a variety of interesting and well-adapted wildlife – including more species of lizard than any other place on Earth. Scientists call this ecoregion Deserts and Xeric Shrublands.

Australia even has a Tundra ecoregion in its Antarctic islands: Macquarie, Heard and McDonald. The tundra biome is cold and windswept. It does not support trees, but is rich with sedges, heaths and dwarf shrubs that can grow in its very wet, acid soil. It’s moisture falls as snow during the winter months.

Australia’s 379 Mammals – 357 are indigenous and 22 are introduced. They include land mammals and coastal marine mammals. 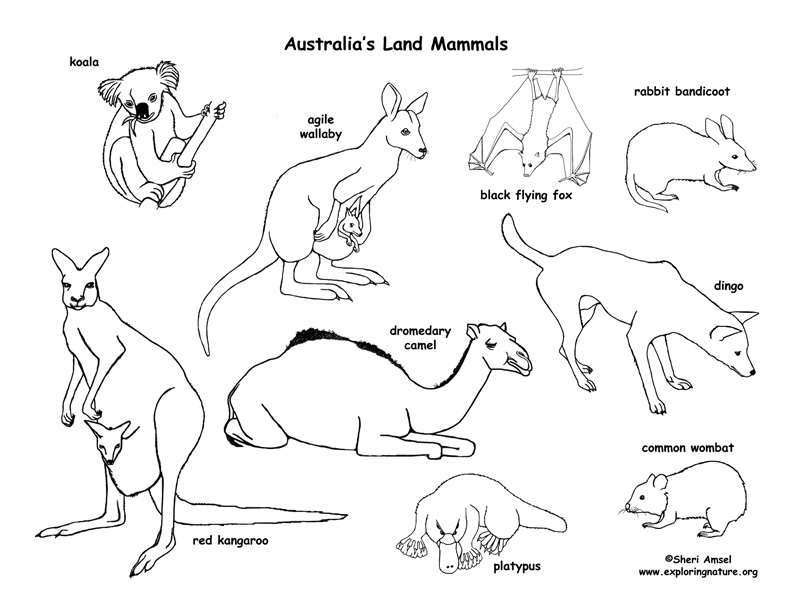 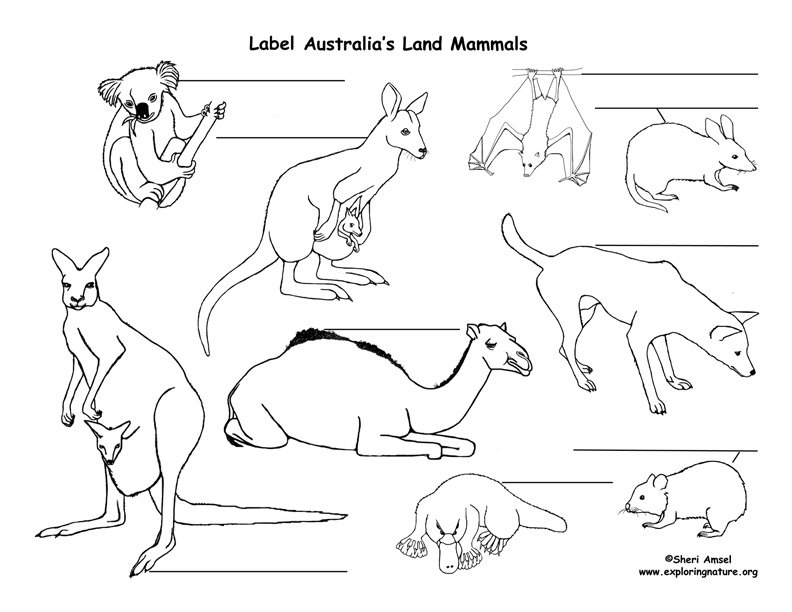 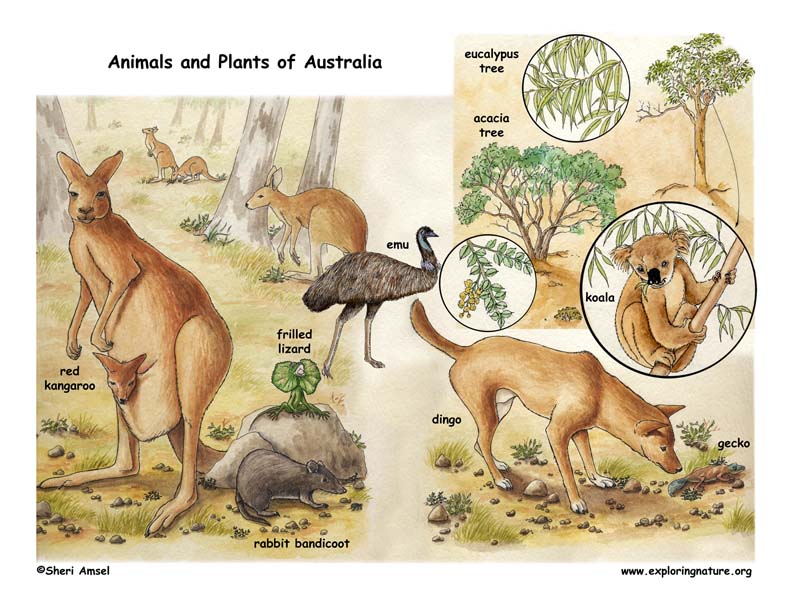 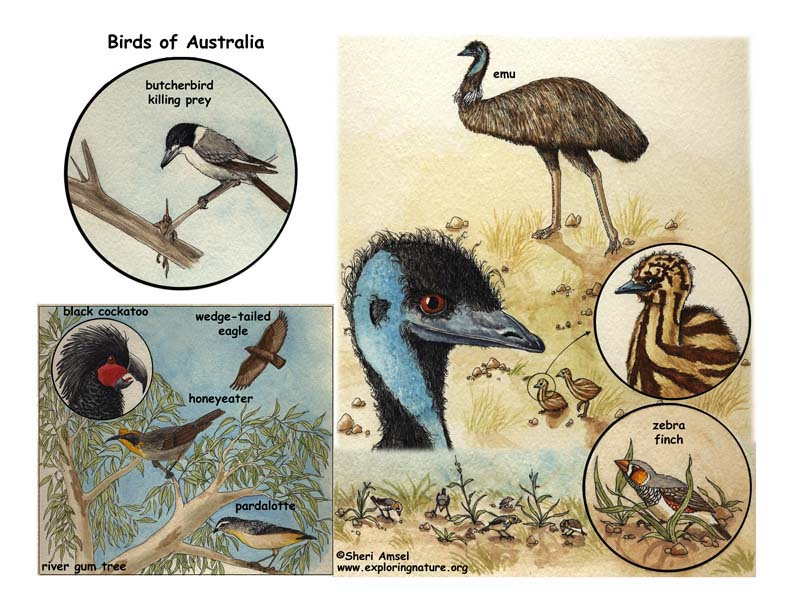 ©2005-2023 Sheri Amsel. All rights reserved.
The material on this site may not be reproduced, distributed, transmitted, cached or otherwise used for anything other than free educational use. It is not to be used for sale or profit of any kind. If you are unsure whether your use of site materials violates the exploringnature.org copyright, contact Sheri Amsel for prior written permission at sheri@exploringnature.org. Thank you for respecting copyright laws.
Site Developed by Eli Madden
Page ID: 1729
IP: 44.192.247.184