Canada is the second largest country on Earth stretching across from the Pacific to Atlantic and in the north from the Arctic to the United States. It is made up of 10 provinces and 3 territories. The 10 provinces include Alberta, British Columbia, Manitoba, New Brunswick, Newfoundland and Labrador, Nova Scotia, Ontario, Prince Edward Island, Quebec, and Saskatchewan. The 3 territories are Northwest Territories, Nunavut, and Yukon.
Canada is so vast that to really understand its biodiversity (the variety of natural life found there), you would need to look at the individual provinces, each with their own unique combination of biomes. (See the individual provinces and territories for more detailed descriptions and regional activities.)

Scientists have broken down these different ecological regions into ecozones, which describe the landforms, biological habitats, weather, animals and plants of that region. Canada has15 ecozones that include:

The Northern Arctic ecozone covers the islands of Nunavut and the Northwest Territories. This region is the coldest and driest part of Canada. A treeless tundra, only the hardiest mammals live here.

The Arctic Cordillera ecozone runs along the northeastern coast of Nunavut and Labrador. This region is a brutal but scenic landscape with lichens and icy mountains.

The Southern Arctic ecozone stretches across the northern edge of the Northwest Territories mainland, southern Nunavut and northern Quebec. It is the transition region between the Arctic in the north and the boreal forest to the south.

The Taiga Cordillera ecozone includes the northern Canadian Rockies between the Yukon and Northwest Teritories. It is made up of steep mountains and high altitude tundra.

The Taiga Plains ecozone runs down the center of the western Northwest Territories and into northern British Columbia and Alberta. Bordered by mountains to the west, the arctic to the east, and the boreal forests to the south, this region is remote and beautiful.

This Taiga Shield ecozone stretches across northern Canada on either side of Hudson Bay from Alberta and the Northwest Territories through Saskatchewan, Manitoba, Quebec, Nunavut and Labrador to the Atlantic Ocean. This region is tundra in the north and moving south turns to boreal forest.

The Pacific Maritime ecozone runs along the western coast of British Columbia. This region has some of the wettest weather in Canada.

The Montane Cordillera ecozone stretches across British Columbia and a small area of southwestern Alberta. It includes British Columbia's coastal mountains, the Canadian Rockies and all the diverse habitat in between the two ranges.

For more information about each Canadian Territory and Province look for the specific link in the index. 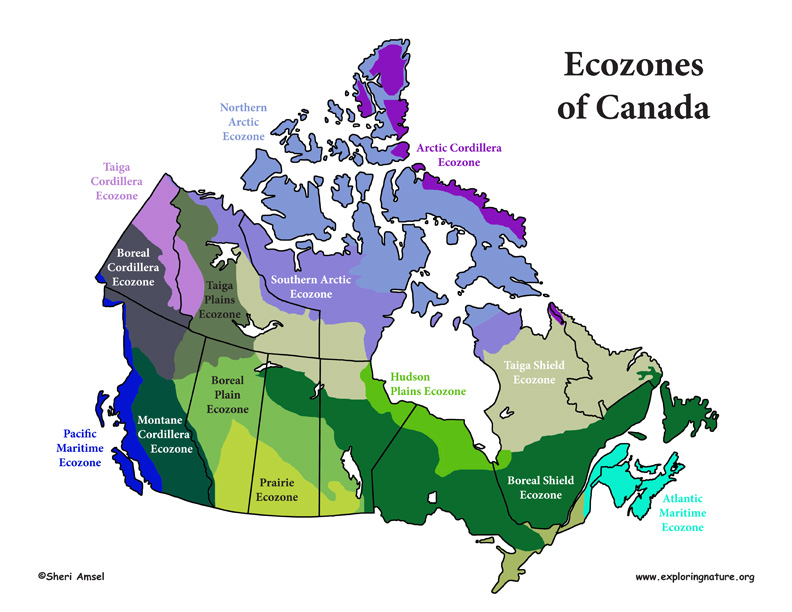 ©2005-2022 Sheri Amsel. All rights reserved.
The material on this site may not be reproduced, distributed, transmitted, cached or otherwise used for anything other than free educational use. It is not to be used for sale or profit of any kind. If you are unsure whether your use of site materials violates the exploringnature.org copyright, contact Sheri Amsel for prior written permission at sheri@exploringnature.org. Thank you for respecting copyright laws.
Site Developed by Eli Madden
Page ID: 1758
IP: 3.236.107.249