Breaking Down the Carbon Cycle
Carbon is an element that is found in all of Earth’s systems - atmosphere, biosphere, hydrosphere, and geosphere. The amount of carbon on Earth doesn’t change, but it does cycle around between all these systems as part of the carbon cycle. The following are the processes and participants of the carbon cycle.

2. Plants, in turn, are eaten by animals (consumers), which convert them through digestion and cellular respiration into energy for their own physiological needs. This consumption and conversion of carbon by animals is called carbon fixation. Animals also release carbon dioxide into the atmosphere through respiration. (See more details about the processes of photosynthesis and cellular respiration in LS1.C: Organization for Matter and Energy Flow in Organisms)

3. When animals, plants, and other organisms die, decomposers (e.g. insects, fungus, and microorganisms) consume and break them down, releasing carbon dioxide into the atmosphere via respiration and into the soil via decomposition. In the ocean, decomposing organic matter settles down to the ocean floor where it builds up as a carbon reservoir. Living things represent the biosphere’s part in the ongoing carbon cycle.

4. The ocean (hydrosphere) can hold much more carbon than the atmosphere (50 times more), some stored for eons deep down in its depths. At the surface, carbon is exchanged back and forth with the atmosphere at a regular and rapid rate. Phytoplankton absorbs CO2 for photosynthesis and releases oxygen. Ocean animals eat phytoplankton (and each other) and release carbon dioxide through respiration. They break down their food through digestion, convert it to energy through cellular respiration and use it for their own physiological needs. As organic matter (waste and dead) filters down in the ocean’s depths, some carbon is not exchanged back into the atmosphere, but is stored as ocean sediments. Carbon also flows into the ocean off the land in its waterways.

With the increase of carbon dioxide in the atmosphere created by human activities, the ocean is absorbing more carbon than usual. This is lowering the ocean’s pH, resulting in its acidification. Ocean acidification affects a myriad of ocean organisms and ecosystem. Specifically, coral reefs have difficultly laying down their structural matrix in an acidic environment, while shelled animals have difficulty building and growing their protective shells. Even the growth and repair of skeletons may be inhibited in an acidic ocean.

5. The most carbon on Earth is found in its mantle and crust underground. The Earth’s geosphere – rocks, minerals, and sediments release carbon very slowly through erosion.
Fossil fuels (coal and oil) were created over millions of years from decomposing organic matter (plants and animals) buried deep in the ground, their carbon trapped. The harvesting and burning of fossil fuels has released massive amounts of carbon into the atmosphere relatively quickly. Scientists believe that the carbon in the atmosphere now is at the highest level it has been in more than 3 million years.

The carbon cycle can be characterized as fast or slow. The biological conversion of carbon in the decomposition of organic matter and by the process of photosynthesis is relatively fast. The release of carbon from inorganic substances, such as erosion of rocks and soil, is slow - sometimes taking millions of years.

6. Besides for burning fossil fuels, humans have affected the level of atmospheric carbon by tilling soil for agriculture, cutting and burning forests for timber and development, and even processing limestone to make concrete. Human activities have begun to release more carbon into the atmosphere than can be absorbed by Earth’s producers. In addition, humans are cutting down trees in record numbers increasing deforestation around the planet, which further inhibits the absorption of atmospheric carbon dioxide. The rise in atmospheric carbon dioxide has caused global warming and climate change. 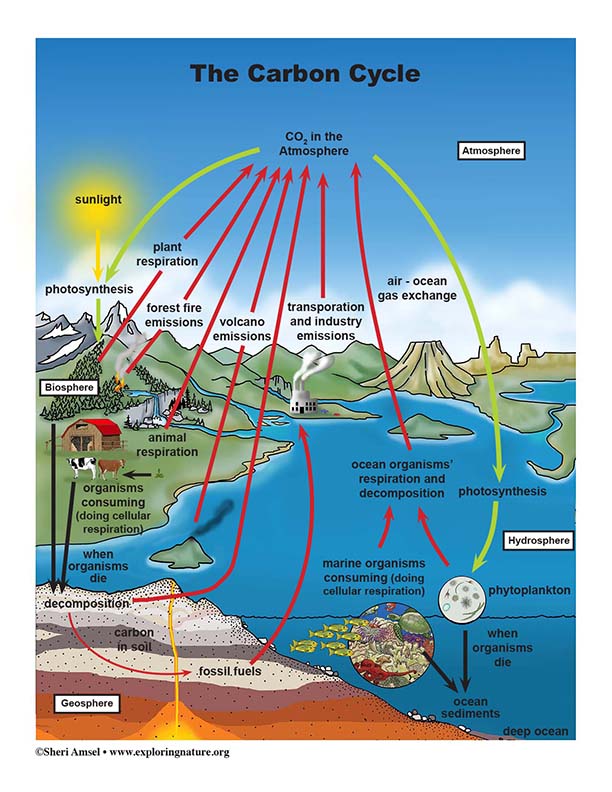 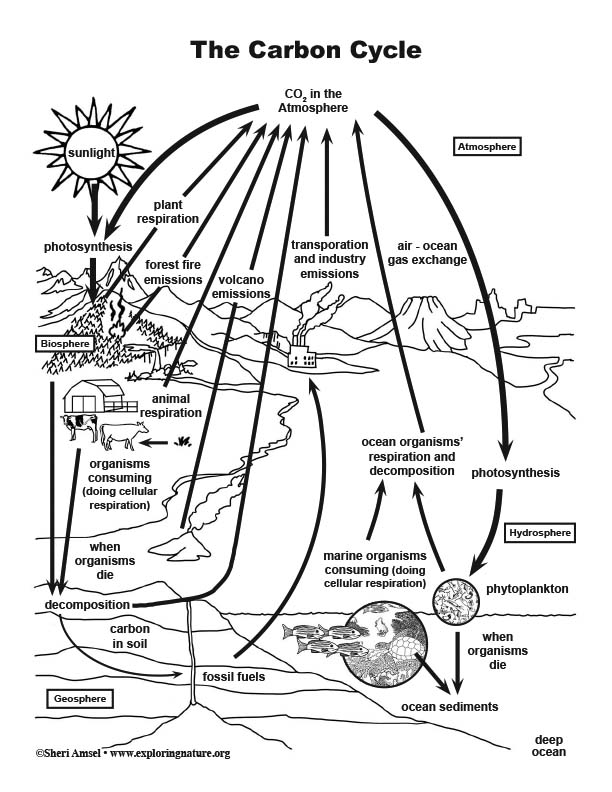 ©2005-2022 Sheri Amsel. All rights reserved.
The material on this site may not be reproduced, distributed, transmitted, cached or otherwise used for anything other than free educational use. It is not to be used for sale or profit of any kind. If you are unsure whether your use of site materials violates the exploringnature.org copyright, contact Sheri Amsel for prior written permission at sheri@exploringnature.org. Thank you for respecting copyright laws.
Site Developed by Eli Madden
Page ID: 6334
IP: 44.192.47.87