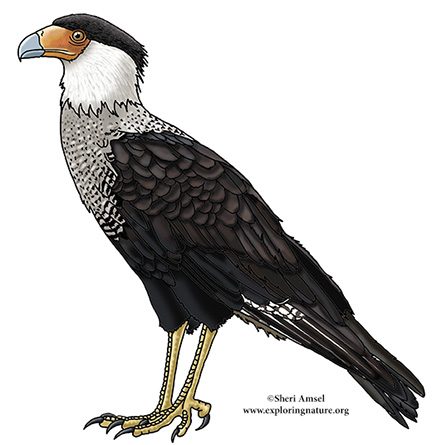 They are found in the southern United States, Mexico, Central America, and in some places in South America and Caribbean.

They are found in open areas; prairie, farmland, scrublands, coastal beaches, and roadways.

They have a black crown with a crest at back. Their featherless face skin is reddish-orange colored. They have a very large, hooked, bluish beak. Their upper throat and cheeks are white. The breast and nape are tannish with black spots and bars. The the body is overall dark, but the tail is black and white striped with a dark end. Underneath and seen in flight, the primary feathers are light-colored with dark ends. Underneath the tail is also light-colored with dark ends. They have long, yellow legs with large talons for grabbing prey or tearing up flesh. They can reach about two feet (58 cm) long from head to tail. Their wing span can reach about four feet wide (120 cm).

Though they do fly or perch on the top of tall palms or cacti to scan the ground for food, they spend a lot of time on the ground, walking around and scavenging for anything edible. They are bold and opportunistic. They can be seen at the edge of a fire zone watching for small animals that are escaping the flames. They will also watch for circle vultures and move in on their edible finds. They may also be seen in their range scavenging around trash heaps and dumps. Though they can be seen in the company of vultures, they can be distinguished holding their wings flat in flight (compared to vultures, who hold their wings in a v-shape).

They will eat whatever they can find – mostly dead animals (carrion). They may also eat fish, frogs, turtles, snakes, invertebrates, small birds and mammals, fruit, and eggs - sometimes raiding the nests of other birds.

They mate for life, breeding in the winter. Females lay 2-3 eggs in a large nest made of sticks and built in a palm tree (sometimes on the ground). They sit on the eggs (incubate) for about a month. Once the chicks hatch, they feed them for about two months until they fledge. They may stay with the parents for another three months after they fledge. 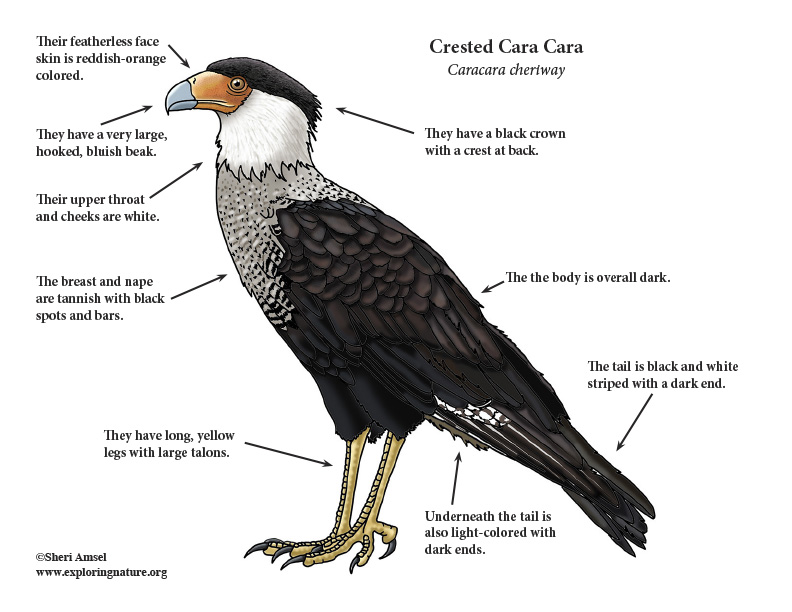 ©2005-2023 Sheri Amsel. All rights reserved.
The material on this site may not be reproduced, distributed, transmitted, cached or otherwise used for anything other than free educational use. It is not to be used for sale or profit of any kind. If you are unsure whether your use of site materials violates the exploringnature.org copyright, contact Sheri Amsel for prior written permission at sheri@exploringnature.org. Thank you for respecting copyright laws.
Site Developed by Eli Madden
Page ID: 6427
IP: 18.207.238.28