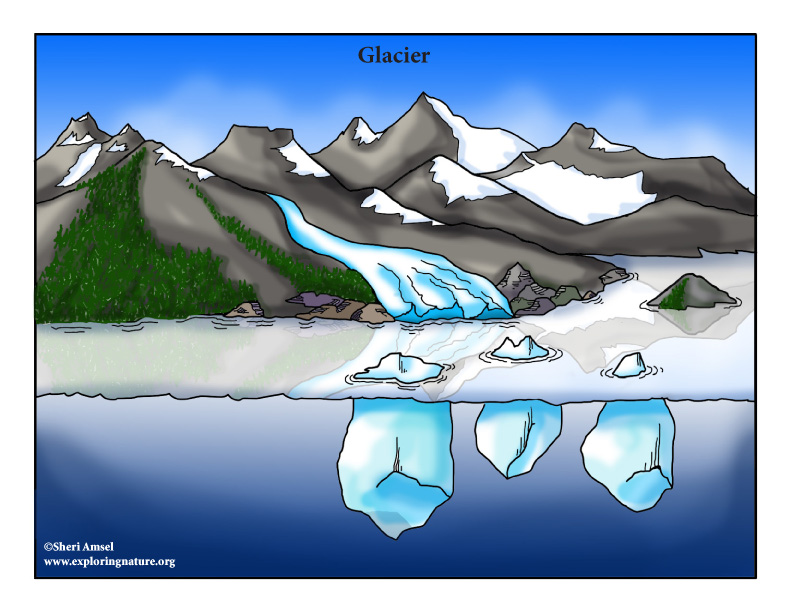 A glacier is a large mass of ice that moves slowly across the landscape. Glaciers make up about 75% of the Earth’s freshwater in frozen form. How much glacier there is on Earth changes over time as the planet goes through warming and cooling cycles. There are thought to have been many glacial eras in the past 3 million years, where the glaciers grew and expanded in cooling periods and then shrank and receded in warming periods. Each time the glaciers recede, they scrape across the landscape, changing landforms as they go. Most of Earth’s glacial activity today is found on Antarctica, Greenland and in the Canadian Arctic. Glaciers make up about 10% of the Earth’s total land area now, compared to during the last ice age, where glaciers covered more than 30% of the planet.

A glacier forms when there is heavy snowfall that does not melt over the summers, so builds up into frozen layers year after year. The tremendous weight of the growing layers presses the snow over time into glacial ice. Trapped inside glacial ice, researchers have found sand, rocks and even pockets of water. The ice grows so thick and weighs so much that it actually begins to move across the land like a slow moving river. These ice sheets have a big effect on the land they cross. Retreating glaciers litter the landscape with mounds of gravel, drop boulders the size of houses, and scrape out lakes and valleys. Glaciers can also calve huge icebergs into the ocean, which can make shipping near glaciers hazardous.

We are in a period of warming on Earth. This has been compounded by human activities that have increased greenhouse gases in our atmosphere. This has caused significant climate change and the polar ice sheets are shrinking every year.

©2005-2022 Sheri Amsel. All rights reserved.
The material on this site may not be reproduced, distributed, transmitted, cached or otherwise used for anything other than free educational use. It is not to be used for sale or profit of any kind. If you are unsure whether your use of site materials violates the exploringnature.org copyright, contact Sheri Amsel for prior written permission at sheri@exploringnature.org. Thank you for respecting copyright laws.
Site Developed by Eli Madden
Page ID: 5157
IP: 34.239.167.149