Use the Template and Resource Links to Fulfill NGSS

Read about how environmental changes can affect the animals that live there.

Read about Keystone Species – species that affect their environment in a significant way:

Read about Natural Selection and how it affects species survival and reproduction:
Adaptation Illustrated
Examples of different animal adaptations
Adaptation in the Schoolyard - Read and React

Read about Biodiversity and Extinction:
How Animals Go Extinct
Which Animals Have Gone Extinct?
Why is Biodiversity Important?

Examples of Models (depicts the concept expressed in the reading):

Ask students to look at the models and explain how each illustrates the concept.

Look at the Model below as a visual aid for comprehension of the process of how environmental change can impact organisms: 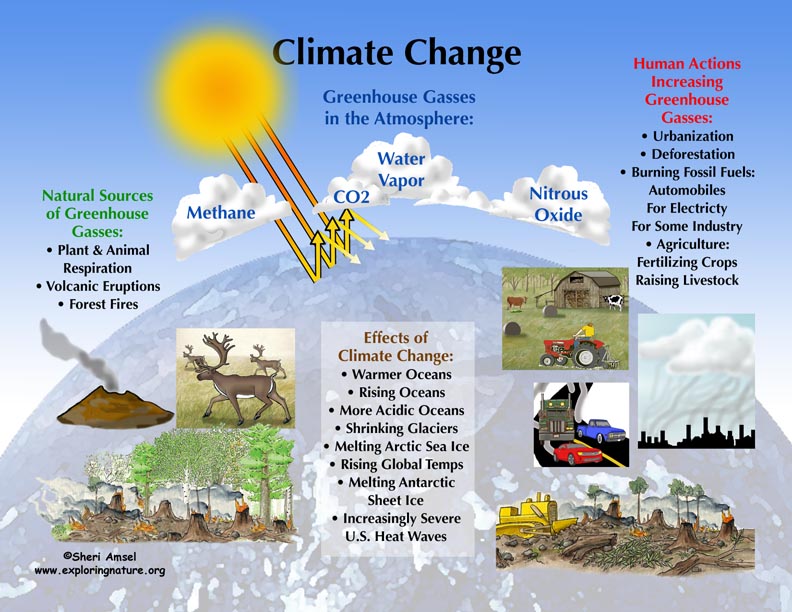 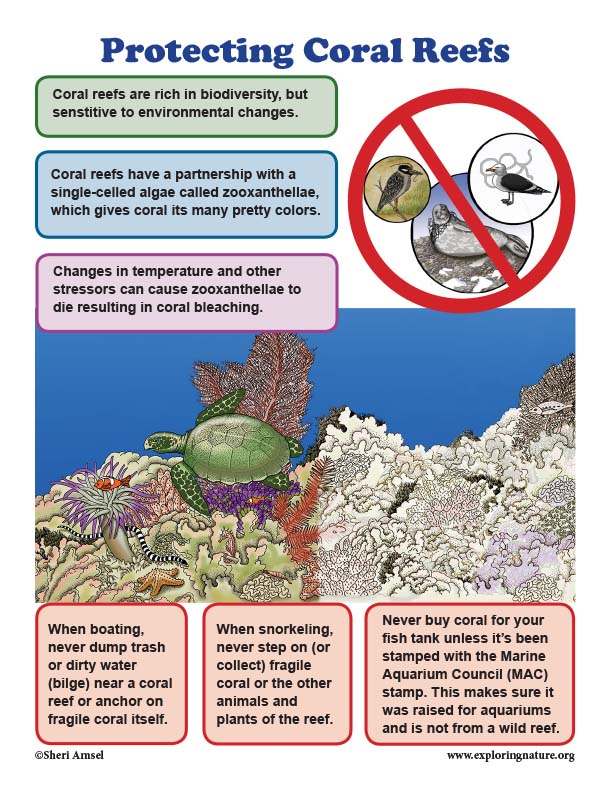 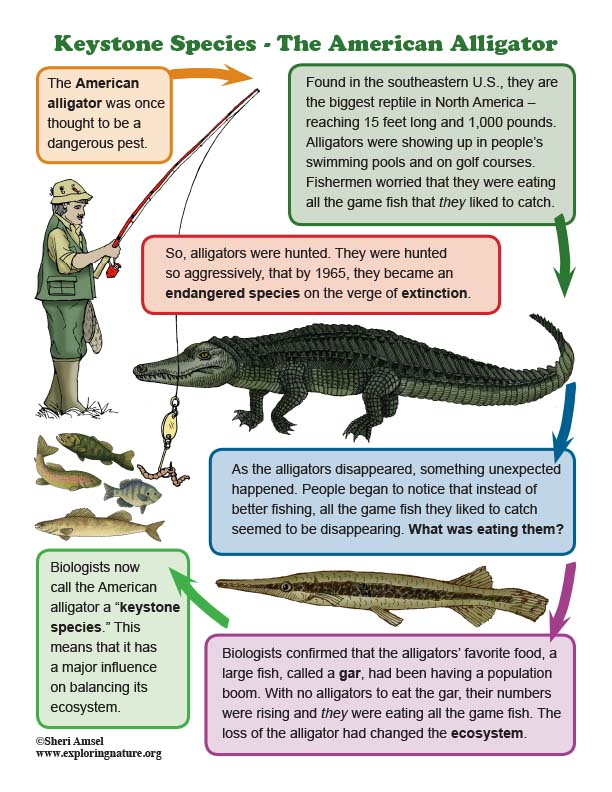 Use critical thinking to complete this Authentic Performance Activity and deepen understanding about adaptations and natural selection. 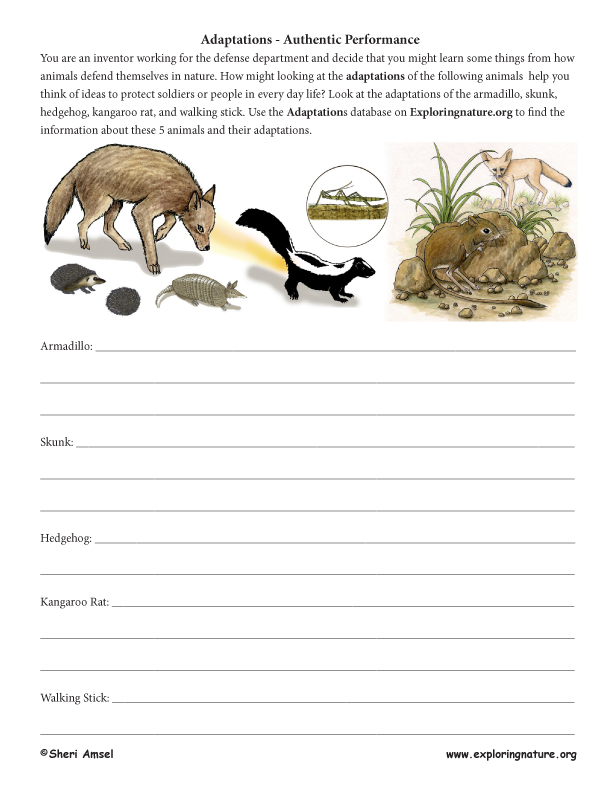 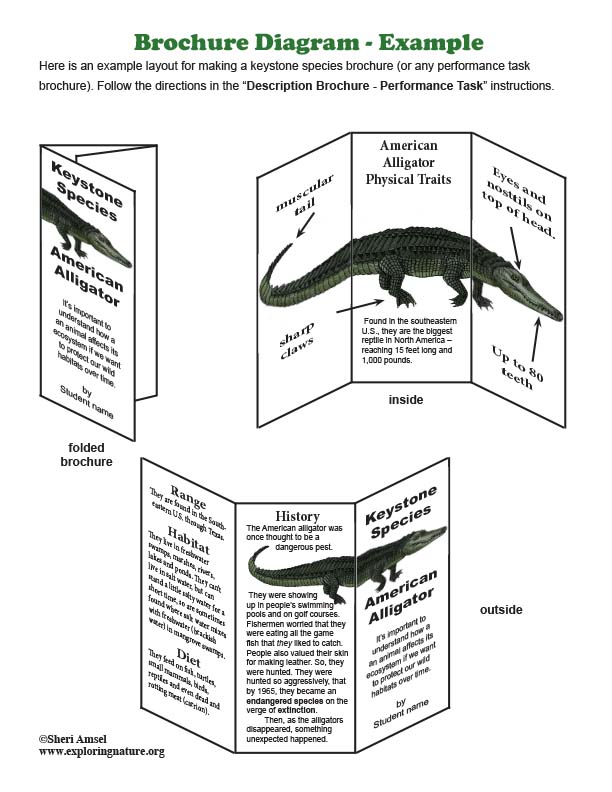 Disciplinary Core Ideas
LS2.C: Ecosystem Dynamics, Functioning, and Resilience
• When the environment changes in ways that affect a place’s physical characteristics, temperature, or availability of resources, some organisms survive and reproduce, others move to new locations, yet others move into the transformed environment, and some die. (secondary to 3-LS4-4)

LS4.A: Evidence of Common Ancestry and Diversity
• Some kinds of plants and animals that once lived on Earth are no longer found anywhere. (Note: moved from K-2) (3-LS4-1)
• Fossils provide evidence about the types of organisms that lived long ago and also about the nature of their environments. (3-LS4-1)

LS4.B: Natural Selection
• Sometimes the differences in characteristics between individuals of the same species provide advantages in surviving, finding mates, and reproducing. (3-LS4-2)

LS4.C: Adaptation
• For any particular environment, some kinds of organisms survive well, some survive less well, and some cannot survive at all. (3-LS4-3)

LS4.D: Biodiversity and Humans
• Populations live in a variety of habitats, and change in those habitats affects the organisms living there. (3-LS4-4)

Analyzing and Interpreting Data
Analyzing data in 3–5 builds on K–2 experiences and progresses to introducing quantitative approaches to collecting data and conducting multiple trials of qualitative observations. When possible and feasible, digital tools should be used.
• Analyze and interpret data to make sense of phenomena using logical reasoning. (3-LS4-1)

Engaging in Argument from Evidence
Engaging in argument from evidence in 3–5 builds on K–2 experiences and progresses to critiquing the scientific explanations or solutions proposed by peers by citing relevant evidence about the natural and designed world(s).
• Construct an argument with evidence. (3-LS4-3)
• Make a claim about the merit of a solution to a problem by citing relevant evidence about how it meets the criteria and constraints of the problem. (3-LS4-4)

Cause and Effect
• Cause and effect relationships are routinely identified and used to explain change. (3-LS4-2),(3-LS4-3)

Systems and System Models
• A system can be described in terms of its components and their interactions. (3-LS4-4)

Connections to Engineering, Technology, and Applications of Science

Interdependence of Engineering, Technology, and Science on Society and the Natural World
• Knowledge of relevant scientific concepts and research findings is important in engineering. (3-LS4-4)

Connections to Nature of Science

Students who demonstrate understanding can:

3-LS4-1. Analyze and interpret data from fossils to provide evidence of the organisms and the environments in which they lived long ago. [Clarification Statement: Examples of data could include type, size, and distributions of fossil organisms. Examples of fossils and environments could include marine fossils found on dry land, tropical plant fossils found in Arctic areas, and fossils of extinct organisms.] [Assessment Boundary: Assessment does not include identification of specific fossils or present plants and animals. Assessment is limited to major fossil types and relative ages.]

3-LS4-2. Use evidence to construct an explanation for how the variations in characteristics among individuals of the same species may provide advantages in surviving, finding mates, and reproducing. [Clarification Statement: Examples of cause and effect relationships could be plants that have larger thorns than other plants may be less likely to be eaten by predators; and, animals that have better camouflage coloration than other animals may be more likely to survive and therefore more likely to leave offspring.]

3-LS4-3. Construct an argument with evidence that in a particular habitat some organisms can survive well, some survive less well, and some cannot survive at all. [Clarification Statement: Examples of evidence could include needs and characteristics of the organisms and habitats involved. The organisms and their habitat make up a system in which the parts depend on each other.]

3-LS4-4. Make a claim about the merit of a solution to a problem caused when the environment changes and the types of plants and animals that live there may change.* [Clarification Statement: Examples of environmental changes could include changes in land characteristics, water distribution, temperature, food, and other organisms.] [Assessment Boundary: Assessment is limited to a single environmental change. Assessment does not include the greenhouse effect or climate change.]

©2005-2022 Sheri Amsel. All rights reserved.
The material on this site may not be reproduced, distributed, transmitted, cached or otherwise used for anything other than free educational use. It is not to be used for sale or profit of any kind. If you are unsure whether your use of site materials violates the exploringnature.org copyright, contact Sheri Amsel for prior written permission at sheri@exploringnature.org. Thank you for respecting copyright laws.
Site Developed by Eli Madden
Page ID: 1944
IP: 3.238.136.36