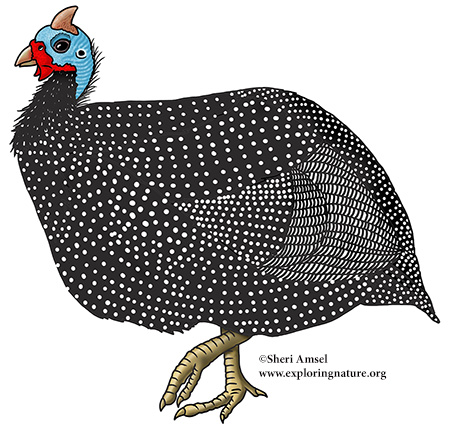 They are native to Africa but have been introduced and domesticated to North America, Europe, Australia, and the West Indies.

They live in open habitats; scrublands and grassland.

They have a large, round, dark body covered in small, white spots and a short tail. Their small head has a boney spike coming off the top, called a casque, which is tan to reddish colored. The rest of the head and some of the neck is covered in wrinkly, featherless skin that can be red, blue, and/or white. There can be a pointed waddle on either side of the mouth of varying size. The downward-pointing beak is tan-reddish brown. There are fine black hairs coming off the back of the head (called filoplumes). Their feet can vary in color from yellowish to black and have sharp claws they use to dig in the dirt for food. They can weigh up to 4 pounds (1.8 kg) and stand up to 2 feet tall (63 cm).

They travel in sometimes large flocks (gregarious) of 25 bird, moving along the ground search for food. They have a very loud call, that they use when alarmed - which is often. When startled they run around frantically calling. They can fly, but usually will run along the ground.

They dig for roots and tubers, eat fruit, seeds, insects and other invertebrates, lizards, snakes, and even small mammals. They do eat ticks.

Females lay 20-30 eggs in a nest scraped into the dirt and well hidden in tall grass or shrubs. Females sit on their eggs (incubate) for about a month). Chicks have camouflaged plumage. 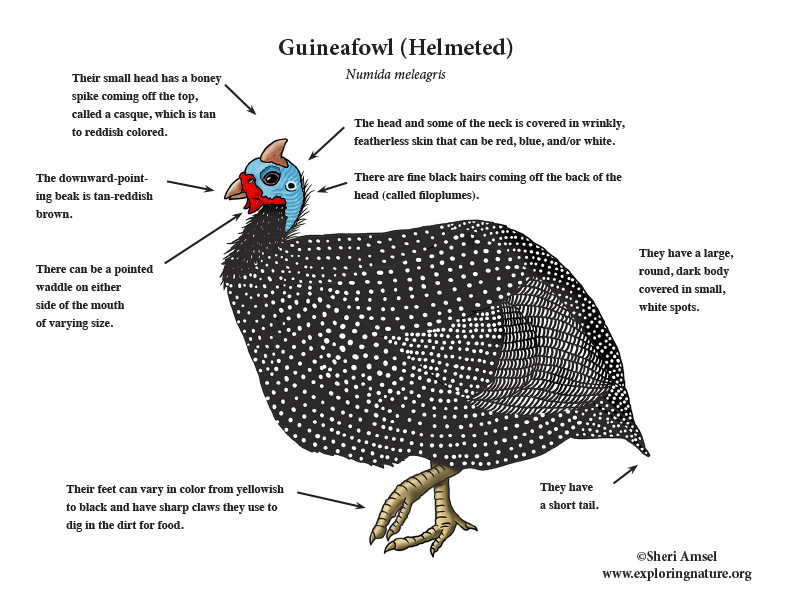 ©2005-2023 Sheri Amsel. All rights reserved.
The material on this site may not be reproduced, distributed, transmitted, cached or otherwise used for anything other than free educational use. It is not to be used for sale or profit of any kind. If you are unsure whether your use of site materials violates the exploringnature.org copyright, contact Sheri Amsel for prior written permission at sheri@exploringnature.org. Thank you for respecting copyright laws.
Site Developed by Eli Madden
Page ID: 6405
IP: 18.207.238.28