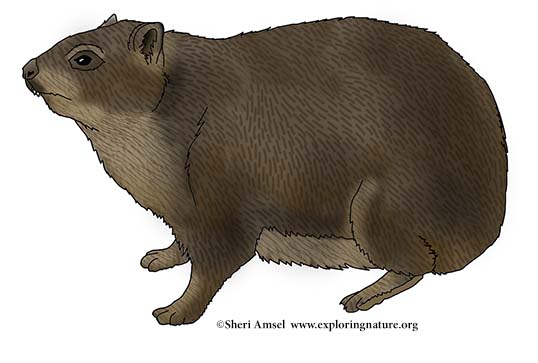 They live in Africa.

They are found in arid regions; deserts (the Sahara, Namib, and Arabian) and dry mountainous regions, savannas, and scrubby forest lands. They particularly like rocky areas in which they can take shelter.

The are relatively small, round-bodied mammals (about the size of a large woodchuck) reaching less than 2 feet long (550 mm). They can weigh up to 8 pounds (4 kg) with males being somewhat larger than females. Their thick fur can range in color from yellow to grayish brown.

They have short, little tail and small rounded ears. They have tusk-like front teeth (incisors) that are bigger in the males.  They are not rodents, though fill a similar niche.

They have four toes in front and three toes in back with rounded, blunt nails and dark pads underneath for negotiating rocky terrain.

They live in colonies (gregarious) with many females and their offspring and one dominant male. The males are territorial , watching for other males and any potential predators. They have a loud, screechy call to warn of danger or scare off other males from their territory. They can also growl or grind their teeth when they feel threatened.

Many such colonies can live in the same proximity - each with one dominant males and many females. There can be as many as 80 rock hyraxes on one area.

The colonies do not dig burrows but live in the shelter of rocky areas or take over an old, abandoned burrows of another animal.

They are herbivores, eating plants, leaves, buds, and fruit. In more arid regions, they may eat bark and lichens. The spend less than an hour each day feeding, eating quickly and returning to their resting locations.

The dominant male has up to 7 breeding females in his "harem" (polygamous) that breed once a year. Females are pregnant for up to 8 months. They each have up to 6 young (usually 2 or 3). Offspring are born with a full coat of fur and open eyes. They are feeding ion their own in just a couple of weeks, though will nurse for 2-3 months.

They live up to 12 years and are not considered endangered. 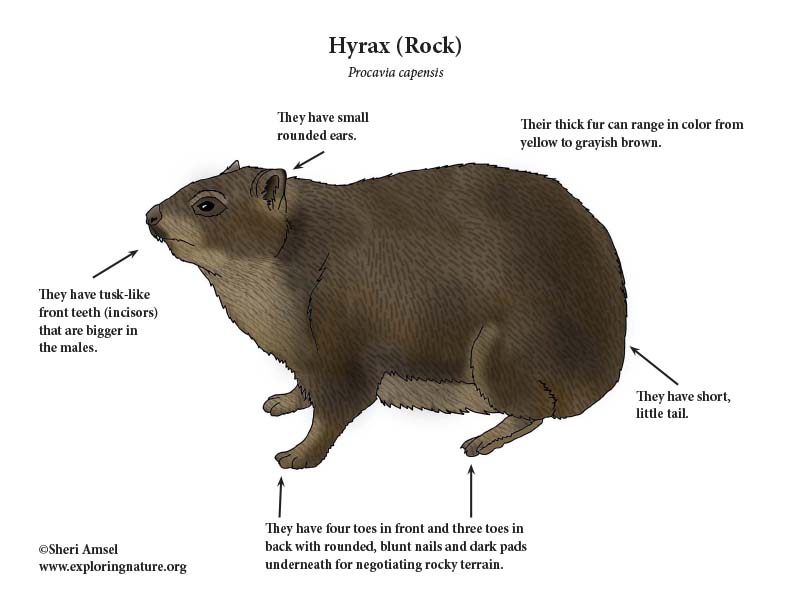 ©2005-2023 Sheri Amsel. All rights reserved.
The material on this site may not be reproduced, distributed, transmitted, cached or otherwise used for anything other than free educational use. It is not to be used for sale or profit of any kind. If you are unsure whether your use of site materials violates the exploringnature.org copyright, contact Sheri Amsel for prior written permission at sheri@exploringnature.org. Thank you for respecting copyright laws.
Site Developed by Eli Madden
Page ID: 6399
IP: 3.235.195.196