They are found in Sub-Saharan Africa.

They live in moist habitats including scrublands, woodlands, grasslands, and along river habitats.

They have light-colored fur with black bands that run down their sides from the middle of the back to the base of the tail. They have long claws on 5 front digits and 4 back digits, which they used for digging. They have a pointed snout with a small, furless nose and a long, pointed tail with a black tip. The whole body length is less than 2 feet long (600mm).

They are active during the day (diurnal). They live in packs with more than a dozen other adults. When threatened they emit a high pitched chittering call. They will rise on their back feet to scan for danger. They move den locations every couple of weeks.

They eat mostly insects and invertebrates, but will take snakes, lizards, and eggs.

Females are pregnant for about 2 months (gestation). They have 2-6 young in underground dens that may be shared by many females. The females will birth around the same time and share the duties of raising young. They can start leaving the den to hunt at about a month old.

They live about 11 years. They are not endangered. 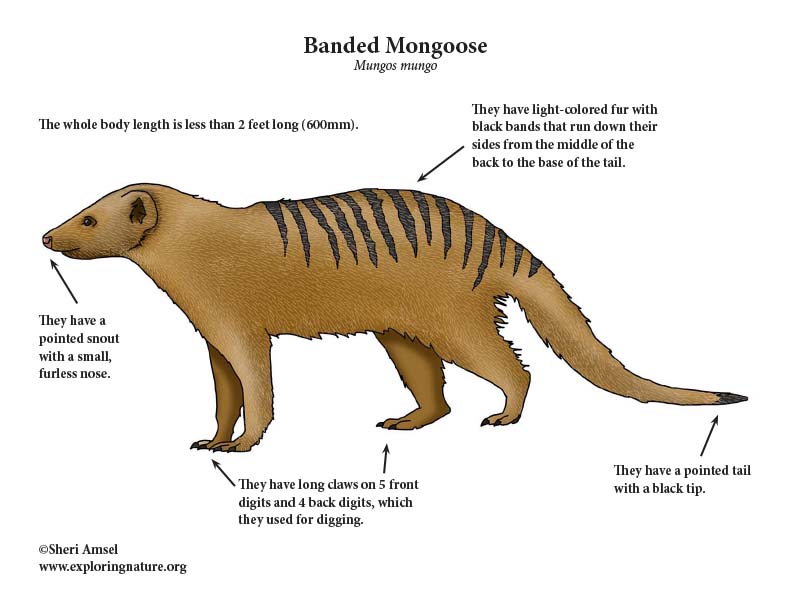 ©2005-2023 Sheri Amsel. All rights reserved.
The material on this site may not be reproduced, distributed, transmitted, cached or otherwise used for anything other than free educational use. It is not to be used for sale or profit of any kind. If you are unsure whether your use of site materials violates the exploringnature.org copyright, contact Sheri Amsel for prior written permission at sheri@exploringnature.org. Thank you for respecting copyright laws.
Site Developed by Eli Madden
Page ID: 6395
IP: 3.235.195.196