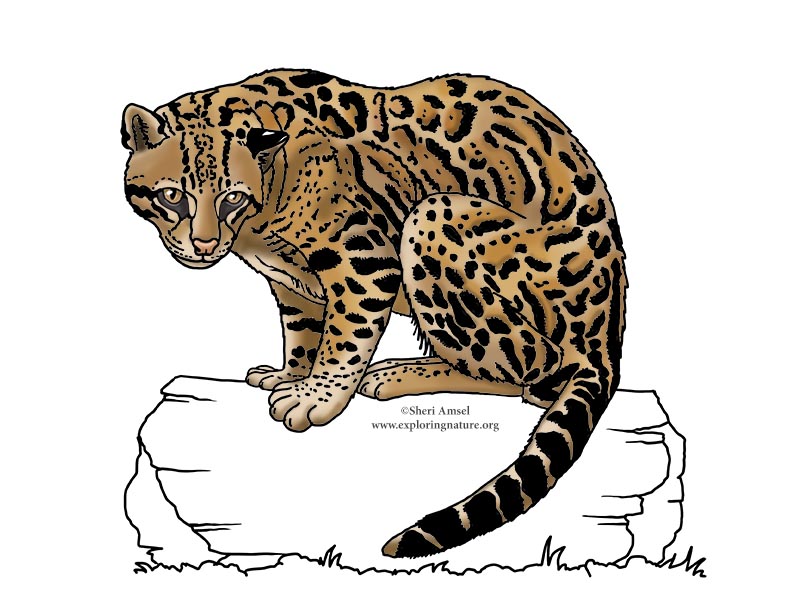 They are found in the southern U.S., Mexico, throughout central American and into central South America (Argentina).

They are found in the dense vegetation of rainforests, grasslands, scrublands, and even marshes. They prefer to live near water.

They are tawny-colored cats, though this may vary from gray to reddish depending upon their habitat, with black spots, rosettes, streaks, and lines. The fur inside the rosettes and streaks is darker in color, which makes their pelt look streaked. This coloration is excellent camouflage, which helps them sneak up on prey and avoid bigger predators. The tail, which is very long, has black rings that are most distinctive on the top side. They have black streaks across the inside of the legs and large paws. The back of their rounded ears are black with a light central spot. There are two black lines across the cheeks. Their fur is lighter on the chest and  belly. They are a medium-sized cat with males weighing up to 35 pounds (16 kg). Females are much smaller.

They are active at night (nocturnal) or early in the morning or evening (crepuscular). During the day, they sleep in dens, dense brush, or up in trees. They live alone (solitary), except for females with young and vert territorial. They are good climbers and swimmers. They communicate with cat sounds – yowls and meows.

They are carnivores, hunting at night (using their exceptional senses). They eat any animal they can find out at night, which includes: armadillos, mice, rabbits, opossums, agoutis, monkeys, anteaters, birds, reptiles, fish, and even deer.

They are killed by harpy eagles, jaguars, anacondas, and mountain lions.

Females are pregnant for about 12 weeks (3 months) and have 1-2 babies in a den of thick brush. She till nurse them for about 1.5 months. They stay with their mother for more than a year, learning to hunt and survive. Adult females will only breed every two years.

They live up to 10 years in the wild and twice that in captivity. They are endangered in some of their range because of habitat loss and hunting, but have a large range so are not threatened with extinction. Hunting them is banned now in much of their range. They are most abundant in Central America. 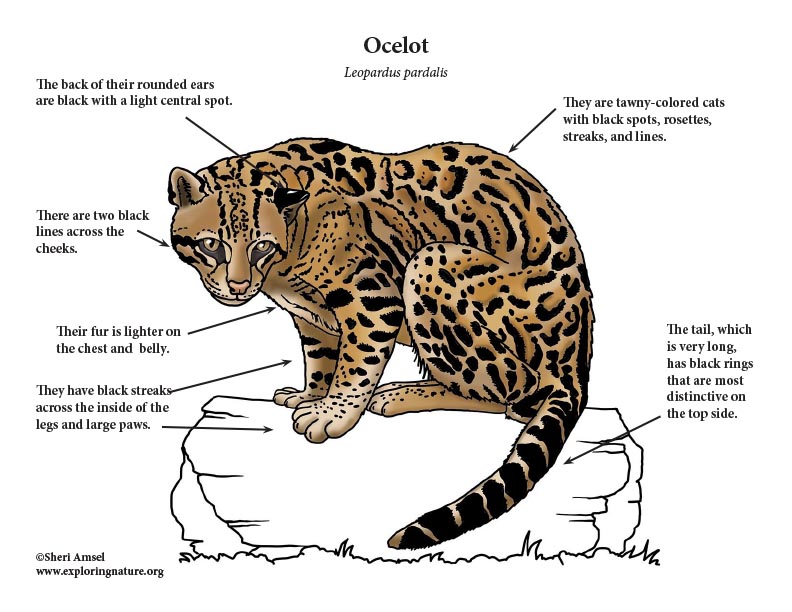 ©2005-2023 Sheri Amsel. All rights reserved.
The material on this site may not be reproduced, distributed, transmitted, cached or otherwise used for anything other than free educational use. It is not to be used for sale or profit of any kind. If you are unsure whether your use of site materials violates the exploringnature.org copyright, contact Sheri Amsel for prior written permission at sheri@exploringnature.org. Thank you for respecting copyright laws.
Site Developed by Eli Madden
Page ID: 6415
IP: 3.235.195.196