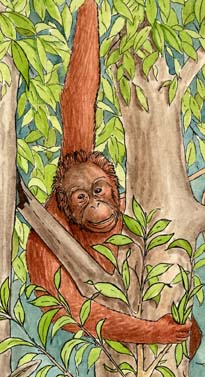 Orangutans, the red-haired great ape of Borneo and Sumatra, are disappearing. They live alone high in the canopy of the rainforest. For years, hunters would take baby orangutans to sell in the pet trade. Many babies died in transport. Though this is now illegal, poaching does continue and deforestation from timber harvest further affects their numbers. Sadly, a great forest fire in Borneo in 1997-98 was believed to have killed many orangutans as well.

What is Being Done?

As of 2000, both Sumatra and Borneo orangutans have been listed as Endangered on the CITES IUCN (International Union for Conservation of Nature and Natural Resources) Red List.

Their numbers are so low that there has been some effort to confiscate captive orangutans and re-introduce them to their native homes. Only time will tell if this amazing primate will survive.

©2005-2022 Sheri Amsel. All rights reserved.
The material on this site may not be reproduced, distributed, transmitted, cached or otherwise used for anything other than free educational use. It is not to be used for sale or profit of any kind. If you are unsure whether your use of site materials violates the exploringnature.org copyright, contact Sheri Amsel for prior written permission at sheri@exploringnature.org. Thank you for respecting copyright laws.
Site Developed by Eli Madden
Page ID: 655
IP: 100.25.42.211