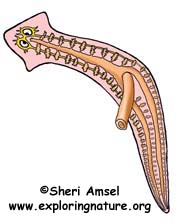 The flatworms include more than 13,000 species of free-living and parasitic species. There are 3 classes of flatworms, the planarians, flukes and tapeworms.

General Physical Traits (Anatomy): Flatworms are bilaterally symmetrical. This means if you cut them length-wise you would have two mirror-image halves. They have a distinct right and left half. This is different from radially symmetrical animals, like the anemones, which can be cut anywhere top to bottom to get two similar halves.

Habitat: They live mostly in saltwater (marine) habitats, but are also found in freshwater.

Habits: They are free-living flatworms (not parasites).

They have a head, brain and sense organs. This is called “cephalization.” The sense organs – called eyespots – look like eyes and are sensitive to light changes, but are not like human eyes. They are made up of simple nerve cells that respond to stimuli, like light. When many nerve cells are gathered in one place, they are called a “ganglion,” so the two eyespots are actually ganglia. They also have points on either side of the head that look a bit like ears, called “sensory lobes” or auricles. They do not hear, but can sense food.

They have nerve cords that run the length of their body in roughly a ladder-shape, so are called – a ladder-type nervous system.

They have muscle tissue that helps them move and feed.

They have a mouth underneath (ventrally) out of which they extend a straw-like pharynx. They use this to “suck up food.” Using their muscle tissue, they create a strong sucking action that tears chunks of tissue off of dead animals. Or they can suck a whole tiny live animal into their body. This action brings the food into the gastrovascular cavity that runs the whole length of the body.

Planarians can regenerate. This means that if you cut one cross-wise, it will grow the other half back!

Reproduction: Every planarian has both male and female reproductive parts, so they are hermaphroditic. They can each fertilize their own eggs and grow many small worms. Then they release them into the water with no larval stage.

To help students learn the anatomy of planarians, print out the black and white anatomy diagram included in the PDF below or access it from this LINK.

Assess anatomical vocabulary comprehension with the Planarian Anatomy Labeling Page included in the PDF at bottom or access it from this LINK.

Other Flatworms:
Flukes (Class - Trematoda)
There are many, many kinds of flukes. They are usually named for the organ on which they feed, for example the liver fluke.

Habitat: They are most common in warm, tropical climates.

Physical Traits (Anatomy):
Flukes have suckers with which they attach to hosts. They also use them to feed on the tissues of their hosts.

Reproduction: Flukes often use a primary and secondary host. The primary host grows the young larval stage of the parasite and then passes it onto the secondary host where the tapeworm adult develops and reproduces.

Habits: They are parasites. This means that they live and feed on the body of another living thing. Tapeworms live in the intestines of animals, including humans. They take the nutrients from their host, robbing them of the food they eat. They also release their toxic waste into the hosts’ digestive tract. They get so large that they can actually block the host’s digestive tract.

Physical Traits (Anatomy): Tapeworms are flattened worms that in extreme cases can reach 65 feet (20m) long. Generally they are about 20 feet (6m) long. They have no head. Instead they have a structure with hooks and suckers called the scolex. They use the hooks and suckers to attach to their host’s intestinal wall.

Reproduction: Behind the scolex, the rest of the tapeworm’s body is made up of little units called proglottids. Each proglottid is a reproducing unit that will break off when mature and release thousand of fertilized eggs into the waste of the animal. When an infected animal passes waste onto the ground, it scatters the parasite for other animals to ingest while they are grazing grass.

Life Cycle: Tapeworms often use a primary and secondary host. The primary host grows the young larval stage of the parasite and then passes it onto the secondary host where the tapeworm adult develops and reproduces. For example, when a tapeworm egg is eaten by a grazing host, like a pig (the primary host), the hatching larva burrows into the animal’s muscles. Then when the meat is eaten by a secondary host, like a human, they are infected. If the meat is well cooked, it will kill the parasite and the human will not be infected, but undercooked pork will allow the parasite to be passed into the human’s stomach. Once there, the stomach acids will actually digest the protective coating of the baby tapeworm releasing it to attach to the intestinal wall and start growing.

Assess anatomical vocabulary of Platyhelminthes (Flatworms) with the Labeling Page in the PDF below.

©2005-2023 Sheri Amsel. All rights reserved.
The material on this site may not be reproduced, distributed, transmitted, cached or otherwise used for anything other than free educational use. It is not to be used for sale or profit of any kind. If you are unsure whether your use of site materials violates the exploringnature.org copyright, contact Sheri Amsel for prior written permission at sheri@exploringnature.org. Thank you for respecting copyright laws.
Site Developed by Eli Madden
Page ID: 1085
IP: 44.192.38.49