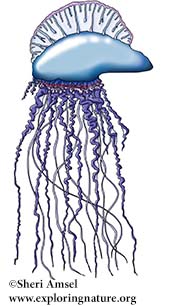 They live in the warm, tropical waters of the Atlantic, Pacific, and Indian Oceans. They are common along the coast of Florida, the Caribbean, and Sargasso Sea.

They are found floating on the surface of the water.

They have a long, gas-filled bladder that is translucent (see through) with a bluish-purple in color and up to a foot long (though many in a population will be smaller). The bladders (or float) come formed in two different shapes (so-called left-handed and right-handed), so that a population is driven in different directions by the wind. This protects a population by preventing them all from being driven in one direction and potentially onto shore in a hard wind.

Each individual is actually a colony of organisms (called zooids). They are genetically identical, but may play different functional rolls in the day to day life of the organism.

Hanging off the bladder are long tentacles 10 feet or more long that can stretch many times that length as they trail in the water. The tentacles contain stinging cells called cnidocytes. Inside each stinging cell sits a spiral fiber, called a nematocyst, that is coiled and ready to spring. If a stinging cell is touched, it triggers the nematocyst, which instantly uncoils to sting and stun prey (or in self-defense). Even after death, contact with a Portuguese Man-of-war tentacle can result in a powerful sting.

They travel on the surface of the ocean driven by ocean currents and wind patterns. The bladder acts like a bout and a sail allowing them to move with the wind. They travel in a colony moving with the prevailing winds.

They eat mostly small fish, but also some crustaceans (shrimp, etc.) and even tiny plankton. They sting their prey with the tentacles and draw them up to many small mouths and stomachs on the underside of the bladder. After the nutrients from their food is absorbed, any water is expelled through their mouths.

Each Portuguese Man-of-war (which is made up of a colony of genetically identical organisms) is either male or female and releases its gametes into the open water. This is thought to be chemically triggered when a populations of Portuguese Man-of-wars is dense enough in the water to make fertilization viable. 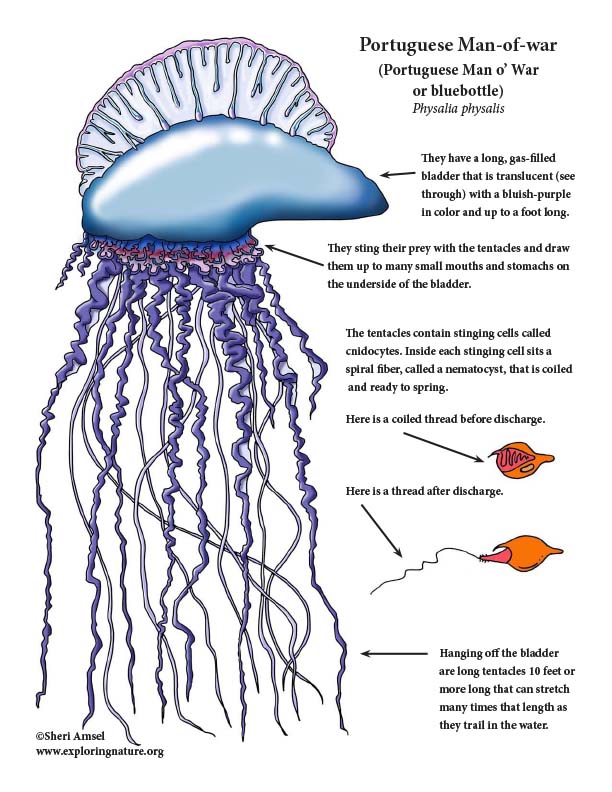 ©2005-2023 Sheri Amsel. All rights reserved.
The material on this site may not be reproduced, distributed, transmitted, cached or otherwise used for anything other than free educational use. It is not to be used for sale or profit of any kind. If you are unsure whether your use of site materials violates the exploringnature.org copyright, contact Sheri Amsel for prior written permission at sheri@exploringnature.org. Thank you for respecting copyright laws.
Site Developed by Eli Madden
Page ID: 6391
IP: 44.192.247.184