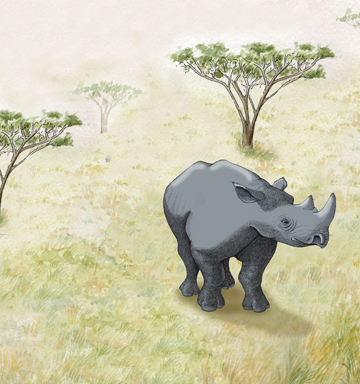 There are five species of rhino: the black rhino and white rhino in Africa, the Asian (or Sumatran) rhino, Indian rhino and Javan rhino.

All rhinos are very endangered. The Asian, Javan and Northern white rhinos are critically endangered on the CITES IUCN (International Union for Conservation of Nature and Natural Resources) Red List.

What is Being Done?

Many regions have developed rhino sanctuaries that are closely guarded to protect them from poachers. This has worked for some species like the Southern white rhino and black rhino in Africa and the Indian rhino. All are increasing in numbers from being critically endangered.

©2005-2022 Sheri Amsel. All rights reserved.
The material on this site may not be reproduced, distributed, transmitted, cached or otherwise used for anything other than free educational use. It is not to be used for sale or profit of any kind. If you are unsure whether your use of site materials violates the exploringnature.org copyright, contact Sheri Amsel for prior written permission at sheri@exploringnature.org. Thank you for respecting copyright laws.
Site Developed by Eli Madden
Page ID: 653
IP: 44.210.237.158