Richard Dawkins was born in Africa. He went to Oxford University and went on to teach zoology at the University of California and Oxford. He is the Charles Simonyi Professor of the Public Understanding of Science at Oxford University. He wrote a series of books about evolution and science including: The Selfish Gene, The Extended Phenotype, The Blind Watchmaker, River Out of Eden, Climbing Mount Improbable, and Unweaving the Rainbow. Richard Dawkins has won many awards for his writing and his contribution to the understanding of science. One of his books, The Blind Watchmaker, was adapted for television and won the Sci-Tech Prize for the Best Science Programme of 1987. Since 1996, he has been Vice President of the British Humanist Association, became a Fellow of the Royal Society of Literature in 1997 and that year also won Fifth International Cosmos Prize in Commemoration of Expo' 90. Richard Dawkins 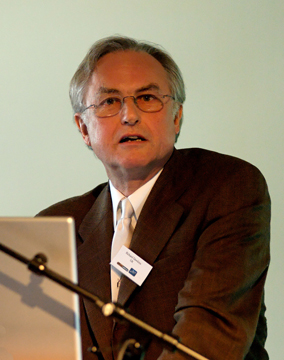 ©2005-2022 Sheri Amsel. All rights reserved.
The material on this site may not be reproduced, distributed, transmitted, cached or otherwise used for anything other than free educational use. It is not to be used for sale or profit of any kind. If you are unsure whether your use of site materials violates the exploringnature.org copyright, contact Sheri Amsel for prior written permission at sheri@exploringnature.org. Thank you for respecting copyright laws.
Site Developed by Eli Madden
Page ID: 1644
IP: 44.192.47.87