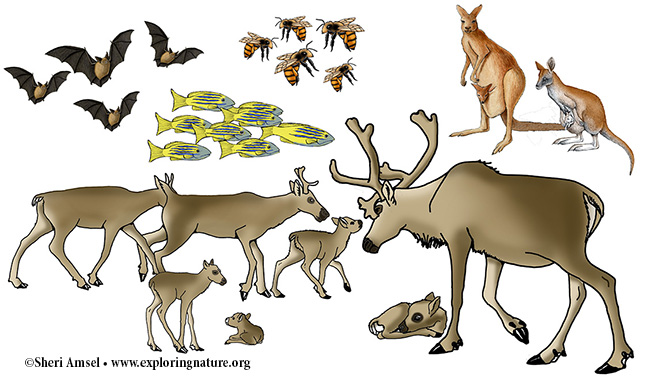 From ants to elephants, many living things prefer to live in groups. Organisms live in groups for many reasons – all increasing their chances for survival. If living in a group helps them survive, organisms will pass that behavior on to their offspring. Because of this, groups of organisms often share genetics, so they are helping their “genetic line” when they help each other in a social group.

Sometimes groups of organisms are not related genetically, but live in proximity to each other, as seen in a herd of gazelles and zebras on the African Savannah. They all keep watch for predators, so are helping each other despite not being genetically linked at all. They have a recognition mechanism that tells them that this other group of organisms is a good fit to increase their chances for survival.

Groups of organisms can vary in size and stability. From a pair of red-tailed hawks bonded for life to a flock of thousands of starlings, group numbers and how long they all stay together depends on the organisms, their habits and their habitats.

A group of lions, called a pride, consists of 20 or more lions, which are mostly females with young. A powerful, male lion fathers the cubs which makes sure the pride has a strong new generations. When he becomes too old, a younger, stronger, male will challenge and replace him to keep the pride strong. The females of the group stay together for life and cope with the change of the dominant male together. If threatened by hyenas or other predators, the pride works together to fend them off. All the females help raise the cubs and hunt together for meat for the whole pride. The lion pride uses the power of the group to obtain food, defend themselves and cope with changes – so food, defense and flexibility.

A larger group, such as herds of caribou, bison, or zebras, use their numbers as a defense. Predators will seek the easiest prey – the very young, old or sick. The herd will gather the young in the middle to protect them when predators are near. Predators taking old and/or sick members may actually keep the herd stronger. When the caribou migrate seasonally to find better grazing, they are followed by a pack of wolves (another animal group), who wait and watch for a chance to take the least fit members of the caribou herd to feed their family group.

In many groups, such as a bee hive or ant hill, there are very specialized jobs (they don’t all do the same thing). This hierarchy helps the group succeed, whether it is a honeybee or a pack of wolves.

If living in a group doesn’t help the organisms thrive, they would not be found in a group in nature. A badger, polar bear or lynx live alone, except when mating or raising young. Their success in their particular habitat is not helped by teaming up.

A healthy ecosystem is made up of many groups of organisms. In fact, social organisms that live in isolation do not do as well as those that live near other groups of organisms. Consider a flock of ibis, eating the pesty insects off a herd of cape buffalo. Or think about a pack of hyenas following a pride of lions hunting gazelle to scavenge what is left over. Living around other groups of unrelated organisms can have a definite advantage for survival.

Performance Expectations Students who demonstrate understanding can:
3-LS2-1. Construct an argument that some animals form groups that help members survive.

©2005-2022 Sheri Amsel. All rights reserved.
The material on this site may not be reproduced, distributed, transmitted, cached or otherwise used for anything other than free educational use. It is not to be used for sale or profit of any kind. If you are unsure whether your use of site materials violates the exploringnature.org copyright, contact Sheri Amsel for prior written permission at sheri@exploringnature.org. Thank you for respecting copyright laws.
Site Developed by Eli Madden
Page ID: 5490
IP: 34.239.167.149