Structure and Function of Ocean Organisms

An organism’s body parts (structures) depends on where it lives – its habitat. Ocean habitats vary and the organisms that live there have many interesting structures and functions that help them survive.

For example, blue whales, eat krill, small shrimp-like organisms, which they filter out of the ocean and swallow without chewing. In fact, a blue whale has no teeth at all, just a large mouth with fringed plates that it uses like a strainer to catch its food. It’s large muscular tongue pushes against the plates to press out all the excess water.

Killer whales do have teeth. They spent much of the year up in the Arctic where they hunt seals. Their slick bodies and powerful fins help them swim fast and cover long distances in the ocean.

Sharks have razor sharp teeth that they use to take large bites out of prey. They often lose their teeth tearing at prey, but another row of teeth are right behind the first one to replace them as they’re lost.

Another ocean predator, the leopard seal, hunts penguins in Antarctica. Penguins are birds, but have adapted wings that are more like fins for swimming after fish. Though they don’t fly, they are fast and agile swimmers and can leap from the ocean onto the ice shelf to escape hungry leopard seals.

The albatross is a sea bird that spends its life soaring over the ocean on long, powerful wings. It only comes on land to breed.

Many ocean animals, from whales to seahorses, use fins or flippers to move, but some sea creatures move with suction cups or water jets. The octopus lacks a bony skeleton, but moves in a very fluid motion squeezing into small place to escape predators or chase prey. Some can even change color to blend in with their surroundings.

Coral, sea anemones, and sponges may look like plants, but are actually animals that attach themselves to the ocean floor. They feed on small bits of food created by schools of fish, sharks, sea turtles, and other reef creatures as they feed nearby. They are swept clean of sand and debris by wave action. Sea anemones have a venomous sting to trap small prey. Clown fish are immune to their sting, and live among the anemones’ tendrils, safe from predators.

Humans have always made useful products from ocean animals and plants. Besides for our dependence on ocean fisheries for food, humans can learn a lot about how to solve problems by studying how ocean animal live. Imagine the products we could develop if we could mimic how the octopus changes color to blend in or how flying fish catch ocean wind currents to glide above the water on extended fins, or how fish in the deep ocean abyss can survive the great pressure down there. We have a lot to learn from ocean creatures. 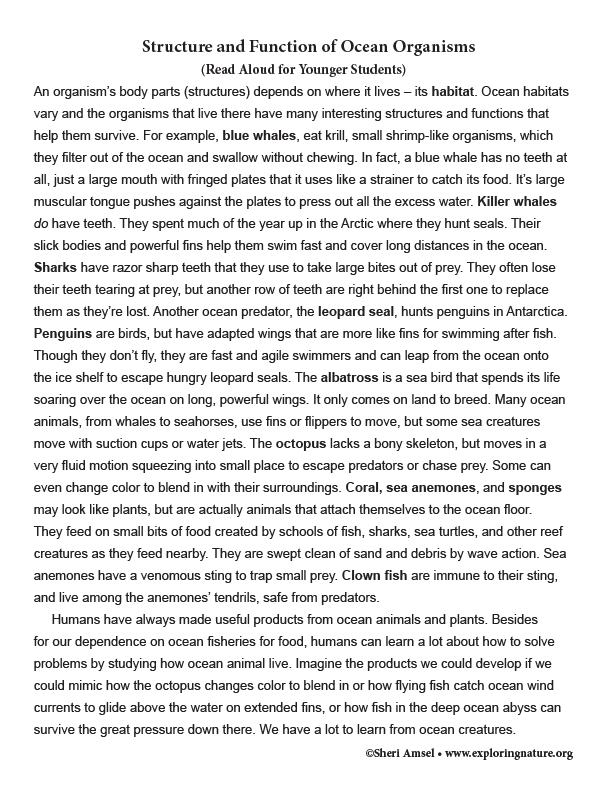 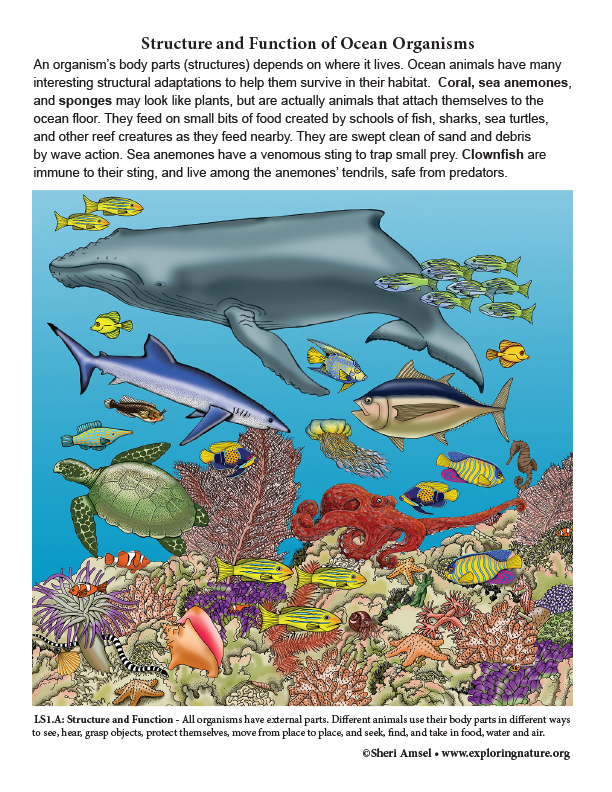 ©2005-2022 Sheri Amsel. All rights reserved.
The material on this site may not be reproduced, distributed, transmitted, cached or otherwise used for anything other than free educational use. It is not to be used for sale or profit of any kind. If you are unsure whether your use of site materials violates the exploringnature.org copyright, contact Sheri Amsel for prior written permission at sheri@exploringnature.org. Thank you for respecting copyright laws.
Site Developed by Eli Madden
Page ID: 6362
IP: 44.192.47.87