That Train is Full of... Cow Manure

A company in Sweden has built the first train locomotive ever to be fueled by cows and their manure. The process they have developed is simple. They take old cow parts and manure and mix then together in a big organic slop. Then they kill all the bacteria with heat. Then they add a new bacteria that will digest the mixture. The bacteria, as it digests, gives off methane gas. The company collects the methane gas, cleans it up and sells it as fuel.

They have found that it takes about 30 cows-worth of fuel to send the train on its 75 mile trip between towns. It replaces an old diesel-powered engine.

Off site resource from Discover: http://discovermagazine.com/2006/may/methane-fuel 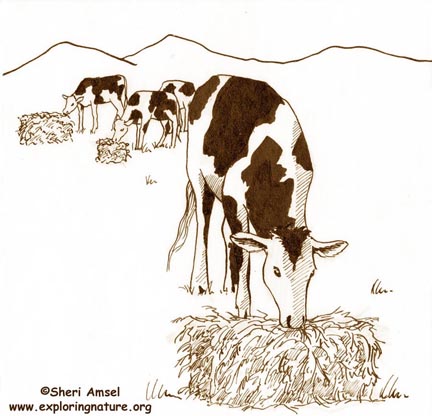 1. Is using animal waste as a fuel source good for the environment?

ESS3.A: Natural Resources  LINK
Humans depend on Earth’s land, ocean, atmosphere, and biosphere for many different resources. Minerals, fresh water, and biosphere resources are limited, and many are not renewable or replaceable over human lifetimes. These resources are distributed unevenly around the planet as a result of past geologic processes. (MS-ESS3-1)

ESS3.D: Global Climate Change  LINK
Human activities, such as the release of greenhouse gases from burning fossil fuels, are major factors in the current rise in Earth’s mean surface temperature (global warming). Reducing the level of climate change and reducing human vulnerability to whatever climate changes do occur depend on the understanding of climate science, engineering capabilities, and other kinds of knowledge, such as understanding of human behavior and on applying that knowledge wisely in decisions and activities. (MS-ESS3-5)

Asking Questions and Defining Problems
Asking questions and defining problems in grades 6–8 builds on grades K–5 experiences and progresses to specifying relationships between variables, and clarifying arguments and models.
• Ask questions to identify and clarify evidence of an argument. (MS-ESS3-5)

• Constructing explanations and designing solutions in 6–8 builds on K–5 experiences and progresses to include constructing explanations and designing solutions supported by multiple sources of evidence consistent with scientific ideas, principles, and theories.
• Construct a scientific explanation based on valid and reliable evidence obtained from sources (including the students’ own experiments) and the assumption that theories and laws that describe the natural world operate today as they did in the past and will continue to do so in the future. (MS-ESS3-1)
• Apply scientific principles to design an object, tool, process or system. (MS-ESS3-3)


Engaging in Argument from Evidence: Construct an oral and written argument supported by empirical evidence and scientific reasoning to support or refute an explanation or a model for a phenomenon or a solution to a problem. (MS-ESS3-4)

Stability and Change
• Stability might be disturbed either by sudden events or gradual changes that accumulate over time. (MS-ESS3-5)

Connections to Engineering, Technology and Applications of Science

Influence of Science, Engineering, and Technology on Society and the Natural World
• All human activity draws on natural resources and has both short and long-term consequences, positive as well as negative, for the health of people and the natural environment. (MS-ESS3-1),(MS-ESS3-4)
• The uses of technologies and any limitations on their use are driven by individual or societal needs, desires, and values; by the findings of scientific research; and by differences in such factors as climate, natural resources, and economic conditions. Thus technology use varies from region to region and over time. (MS-ESS3-2),(MS-ESS3-3)

Intergrate this Lesson with NGSS:

6) Discuss the Connections to Nature of Science.

7) Make note of other questions generated in the process of exploring this Scientific Phenomena.

©2005-2022 Sheri Amsel. All rights reserved.
The material on this site may not be reproduced, distributed, transmitted, cached or otherwise used for anything other than free educational use. It is not to be used for sale or profit of any kind. If you are unsure whether your use of site materials violates the exploringnature.org copyright, contact Sheri Amsel for prior written permission at sheri@exploringnature.org. Thank you for respecting copyright laws.
Site Developed by Eli Madden
Page ID: 1585
IP: 44.192.47.87